A Visit to the Public Welfare Saxaul Forest, Green Ambassadors of 3TREES Show You a Different Alxa

"Green Ambassadors" from all over the country arrived in Alxa Left Banner, Inner Mongolia on September 8, 2018 to participate in the three-day public welfare visit event of "Long Planting Journey with One Heart And One Mind" initiated by 3TREES, and it was understood that after the first visit in 2017, 3TREES once again sent employees, partners and consumers to 3TREES Public Welfare Saxaul Forest in Alxa. And as different from offline public welfare activities in the past, this year's public welfare tree planting of 3TREES started on the Internet first: in early August, the interactive platform of "Buy 3TREES and Plant Three Trees" was launched where consumers and public welfare followers of 3TREES bought and adopted saxaul trees through the online platform and participated in daily tasks such as watering and removing sand for their saxaul trees. And the lucky ones among them were selected to join the team of 3TREES Green Ambassadors and went to Alxa to visit the saxaul trees in person.

Alxa, located in the westernmost area of Inner Mongolia, is the last piece of jigsaw puzzle of the converging deserts of Tengger, Badain Jaran and Ulan Buh, where the seemingly fragile saxaul trees are stubbornly blocking the deserts from spread and diffusion.

A delegation of 3TREES Green Ambassadors went to 3TREES Saxaul Forest in Suhaitu Gacha on the morning of September 9, when, unexpectedly, it rained in Alxa after a long drought, perhaps due to the magical power of public welfare. And when the Green Ambassadors arrived at the forest, the rain stopped, and all the trees had just taken in enough water and were in neat bunkers. They were none other than the saxaul trees just planted by 3TREES in March this year, and it was understood that from 2016 to 2019, the total number of the trees planted by 3TREES in key ecological areas of Alxa will reach 1.5 million, which could save nearly 10 million ㎡ of deserts and build a green barrier along the edge of Tengger Desert.

Zhu Dejun, senior communication officer for the desertification control project of Alxa SEE Foundation, Xu Lifang, vice president of SKSHU Paint Co., Ltd., representatives of 3TREES's outstanding partners and consumers jointly held an unveiling ceremony for Saxaul Forest No.8 in front of the newly planted trees, and members of the Green Ambassador visiting group who were present came forward and solemnly signed their names on the publicity board of the forest. At the same time, thousands of netizens from all over the country also signed and sealed online through the 3TREES Public Welfare Tree Planting Platform, and thousands of online and offline people joined hands to leave marks on the background of the trees as witness to the miracle of life in the desert. 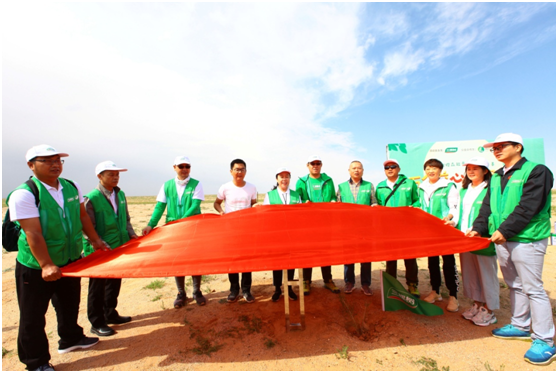 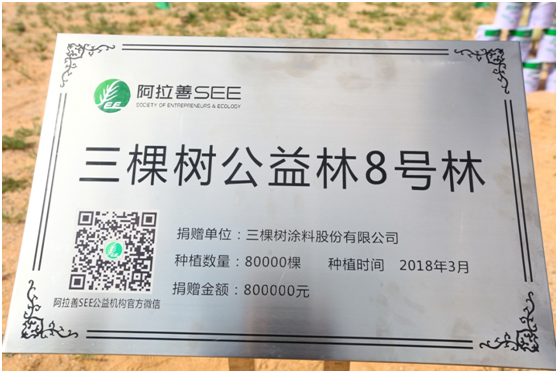 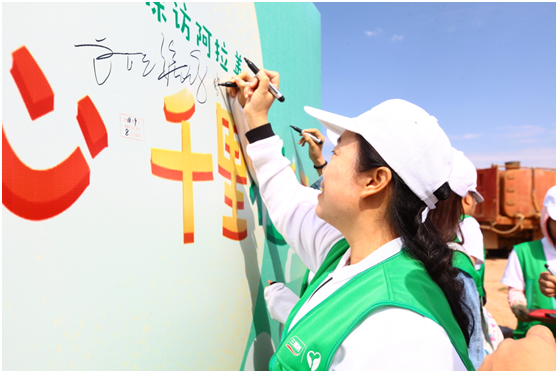 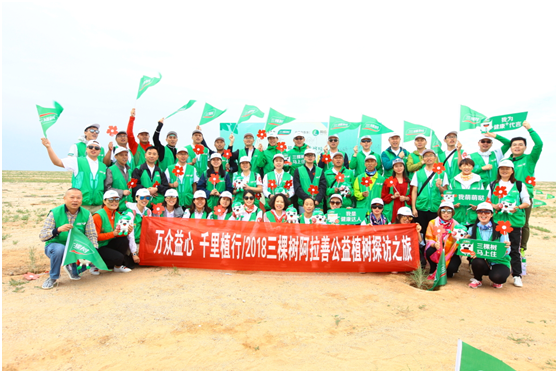 In order for many of the Green Ambassadors who first came into the desert to have a better understanding of their environment, the staff divided the visiting group into three sections: ones for assessment and approval, watering and grafting of Cistanche deserticola. And under the guidance of SEE experts and local herders, they respectively experienced the processes. Also, on-the-spot experience enabled everyone to understand how complicated and tedious it was to plant and maintain the trees in the desert in a very short time. And according to the local herders, it is hard to grow a saxaul tree, as water shortage is the biggest problem for the local groundwater level is low, so it is necessary to water the trees’ seedlings twice in the first year of planting, and continue to water once or twice in the second according to the climatic conditions, and all the water is brought in from the surrounding areas by large tankers. 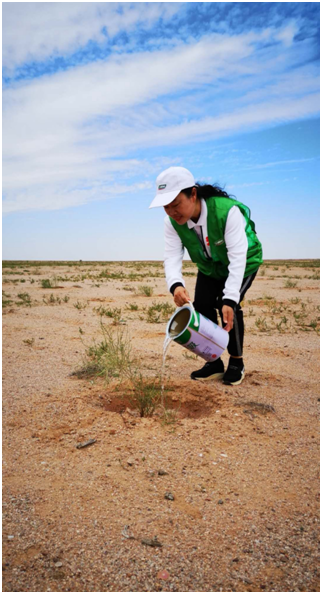 The saxaul trees assessment and approval team recorded the total number of planted seedlings and the dead trees in the area by steps and counting, and found that the survival rate of the saxaul trees reached 92% by two sets of data. And SEE staff informed that the figure was already an ideal result as it was reported that 800 kilometers of desert vegetation belt with saxaul forest as the main body had been seriously damaged and degraded in the past in Alxa and the natural regeneration and development of the trees in the desert was very slow and difficult. So it was meaningful but hard to restore this natural ecological barrier by artificial means. 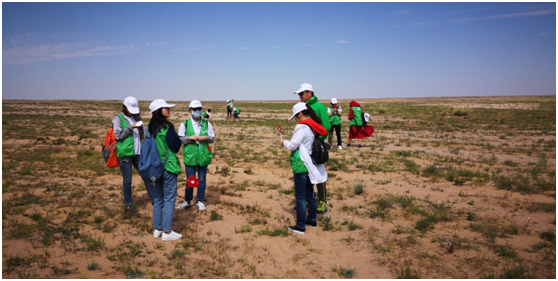 Cistanche deserticola, a kind of plant parasitic on the root of saxaul trees and absorbs nutrients and water from its host, is known as "the desert ginseng", has high medicinal value, and is a traditional and precious Chinese medicine. And so after planting saxaul trees, herders could get more economic income by grafting Cistanche deserticola. Moreover, with love and doubled charity, the planting of saxaul trees by 3TREES has not only improved the local natural conditions, but also increased the income of local herdsmen through its derivative economic value.

Through their hands-on practice and experience, the hardship and difficulty of public welfare work sunk in the mind of the participants as they were experiencing the planting and maintenance; the interesting photos of Green Ambassadors with saxaul trees were spread through WeChat Moments, attracting more people to participate in and pay attention to this public welfare event.

Eight volunteer representatives of 3TREES consumers from all over the country took a group photo with their adopted saxaul trees, and showed the pictures in their WeChat Moments and left a message: "I think saxaul trees volunteering is something very meaningful, and I hope to contribute to the environment cause by participating in such actions as the significance of being a Green Ambassador is not only to conduct tree planting and public welfare, but also to be a communicator so that more people could understand Alxa and environmental protection. Small efforts can make big changes, though slowly, to the whole environment."

Rao Baomei, a volunteer from a warm and humid southern city, was invited to participate in 3TREES Visiting Group as a Green Ambassador. She was full of yearning and expectation for her first visit to the vast desert. She said that she didn't know until she came to Alxa that it used to be a grassland. The grassland has been deteriorating in recent years due to desertification. And during her visit to the Saxaul Forest, she marveled at their tenacity and vitality in the desolate sand, and keenly felt that if desertification continued, those lives would eventually disappear. So she said she would follow in the footsteps of 3TREES and call on more people to participate in environmental protection and public welfare to jointly guard the homeland of mankind.

3TREES Green Ambassadors came to Moon Lake in the depths of Tengger Desert to visit Alxa SEE Natural History Museum located in the desert oasis on September 10, which was built by Alxa SEE Ecological Association, the largest public welfare and environmental protection organization in China and was the first museum initiated by entrepreneurs in the country, with the theme of ecological and environmental education and for the purpose of recording the 14-year public welfare history of Alxa SEE. 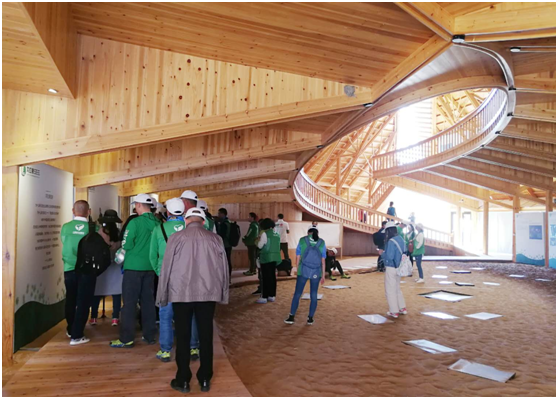 While visiting the exhibits, the Green Ambassadors listened to a work brief on efforts of Alxa SEE in the area. According to reports, the land in Alxa is in serious desertification and extremely dry, with an annual precipitation of less than 100 ml, while evaporation reaches 3000 ml per year. And due to the destruction of vegetation and the intensification of desertification, Alxa, once rich in grasses and sheep, has become a source of sandstorms in China. On the other hand, saxaul trees are heat- and cold-resistant, and could survive temperatures of 70℃ to -40℃ above the desert surface, so the seemingly weak saxaul trees stubbornly prevent the wanton spread of yellow sand, and the large areas of saxaul forests have effectively reduced the number of sandstorms and desertification areas. Alxa SEE Foundation has planned to have 100 million saxaul trees planted in 133,333.333m2 in 10 years.

Su Rina, a Mongolian Chinese girl working for SEE Foundation from Alxa Left Banner, said that she had witnessed the conflicts and struggle between saplings and sand, and between hope and despair since joining the Foundation to arrange for herdsmen to plant saxaul trees. She knew that only those who really wanted to live there could shoulder the mission of restoring ecology. As Zhu Dejun, a senior communication official of Alxa SEE Desertification Control Project, explained to volunteers, "We must protect and restore the desert ecosystem, curb desert expansion, restore the ecological barrier of Alxa, and prevent the three deserts from joining together." 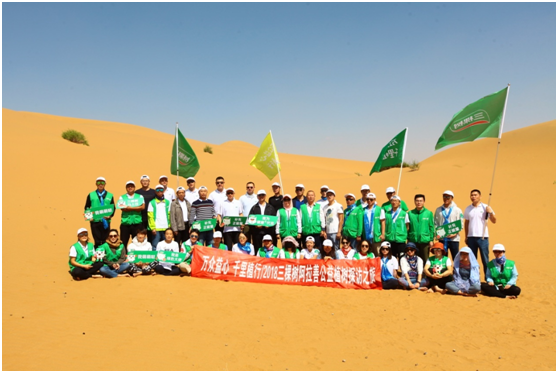 A group photo in the desert 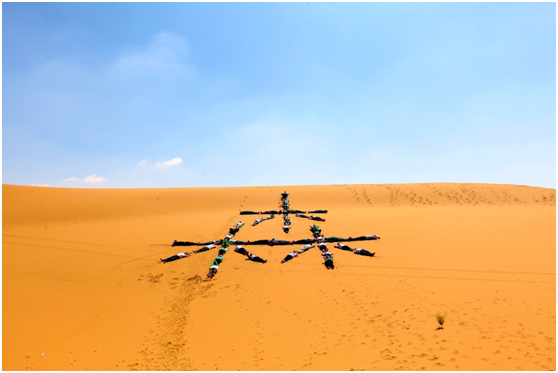 Collective modeling in the desert 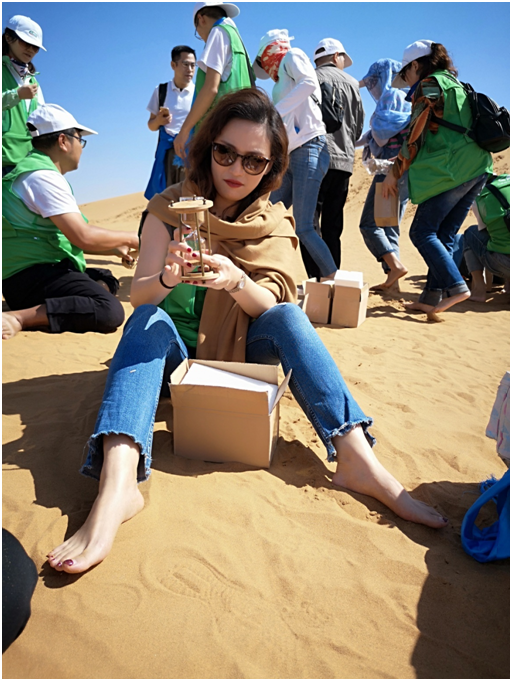 Enterprises not only are the driving force of economic development, but should also bear the heavy responsibility of a society’s sustainable development. If the "100 million Saxaul Trees" project launched by Alxa SEE Ecological Association in 2014 ignited the dream of ecological management, the online tree planting by 3TREES and the visit to Alxa were a relay of the torch for public welfare which would spread the light all over China. And just as Ms. Xu Lifang, Vice President of SKSHU Paint Co., Ltd. said at the welcome dinner in Alxa: "Restoring the beautiful ecology, harmonious development and coexistence between man and nature is about the concept of ecological health advocated by 3TREES all along, and it also coincides with its corporate culture of 'Imitation of Nature'."

As an enterprise producing healthy coatings, 3TREES shoulders the mission of "making homes healthier and cities more beautiful", and has been committed to energy saving and healthy coatings since its establishment, and the concept of "healthy, green and natural" adhered to by 3TREES is aimed at the same goal as the ecological protection being undertaken by SEE Ecological Association. Moreover, 3TREES has been attached to saxaul forests in Alxa since "99 Public Welfare Day" in 2016. Up to now, 3TREES has donated RMB15 million to Alxa SEE Foundation. And 3TREES and its partners visited the "3TREES Saxaul Forest" for the first time in 2017, and sent Green Ambassadors to the Saxaul Forest again in 2018 as it hoped to awaken the environmental awareness of people from all walks of life through public welfare. And at the heart of public welfare is the goal of letting the outside world know more about the grim situation of desertification, calling on more people to participate in the cause of ecological protection, and finally restoring the green barrier functionality of the 800-kilometer Saxaul Forest so that the deserts could restore vitality.