On August 9, a group of people from all over the country gathered in Fujian for a five-day 3TREES Healthy Eco-Tour. They were chosen through lucky draws from those who purchased 3TREES "Immediate Move-in" service from offline dealers or online Tmall flagship stores, or who registered for this event on 3TREES's official WeChat and Weibo. 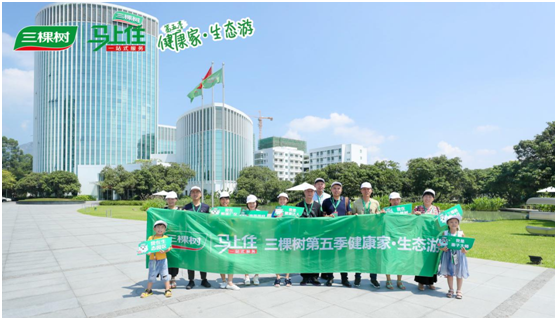 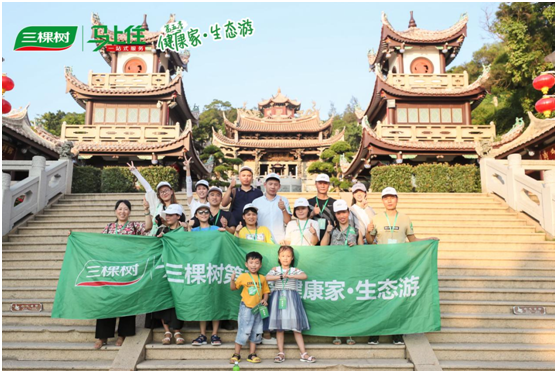 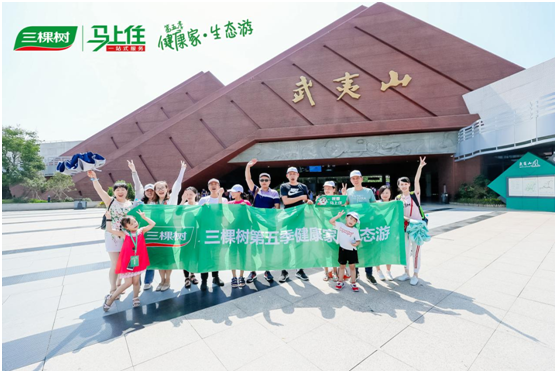 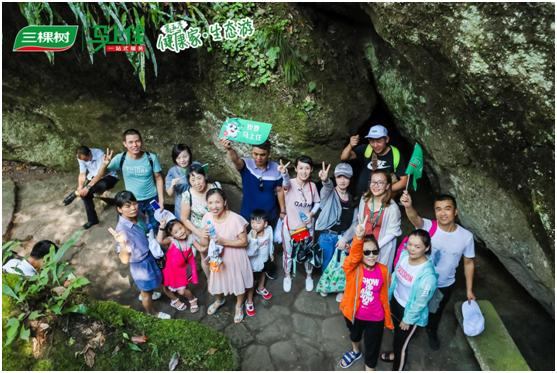 In the five days, under the careful and thoughtful arrangement of 3TREES, friends from all over the country strolled in the “Park of Intoxicating Beauty” at 3TREES headquarters, leaving their good wishes at the foot of Goddess Mazu on Meizhou Island, visiting the Jiuqu River, watching the “Line of Sky”, climbing the Roaring Tiger Rock and tasting the local authentic Wuyi tea in Wuyi Mountain, and the special occasion also enabled them to make friends. And perhaps the meaning of traveling is about let oneself fly to enjoy the afterglow of the sunrise, the sunshine and rain, the stars and the wind, and all kinds of people on the journey.

The headquarters of 3TREES is known as the "Factory of Intoxicating Beauty", which is backed by the towering Jiuhua Mountain and accompanied by 6,666,666.667m2 of litchi forests and natural lakes. It is hard to imagine that such a picturesque place would be a paints producer. Having felt the history of 3TREES Museum and experiencing 3TREES’s Corporate Cultural Gallery and Technologies Center, many people were shocked by the cutting-edge technologies as a mother said on the spot, "I would like to be an agent of 3TREES!" Also, wonderful little games such as golf, dynamic bikes, fingerboard long jumping, planting trees with wheels, etc. made participants relax and shortened their distance in interaction and cooperation. And sample painting was a game deeply loved by children, when a child quietly told her mother, "Mom, we could use 3TREES for wall renovation this time, and then we will be able to move in at once!" As the climax approached, there was even some popular Karaoke singer's heroic challenge to the popular corporate song that 3TREES solicited from the public, saying: "Let me sing 3TREES corporate song for you!"

The second stop of the trip was to Meizhou Island, which is known as "the Fairyland in South China", and is also the seat of the Ancient Goddess Mazu Temple. The concept of respecting, returning to and cherishing nature in Goddess Mazu culture coincides with 3TREES’s culture concept of "Imitation of Nature".

Standing under the big archway, and overlooking the buildings stacked up along the axis, we saw the layout was so exquisite. And amid the smog of the Prince's Hall, one could see the piety of hundreds of millions of Goddess Mazu believers; before going to the Tianhou Palace, one could feel the grand occasion described in the unique couplet on the gatepost that believers need to be bathed and fast before worshiping Mazu the Goddess; touching Goddess Mazu's jade plate in Chaotian Pavilion and praying for everything to go well… 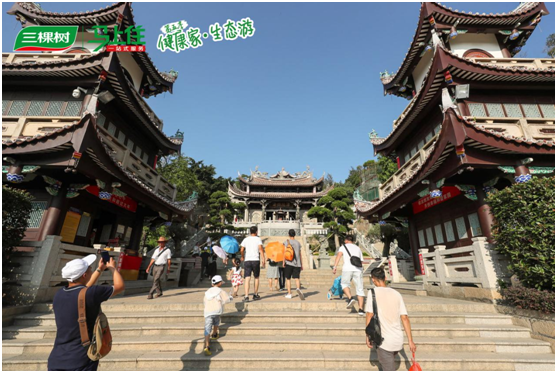 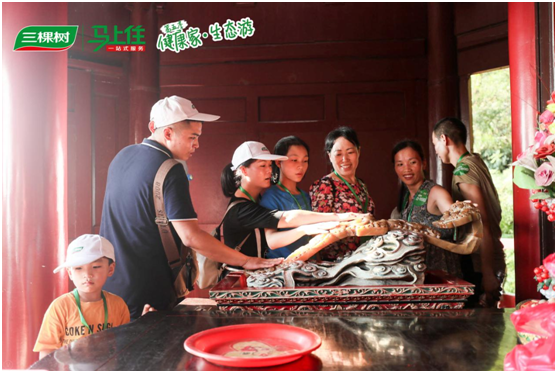 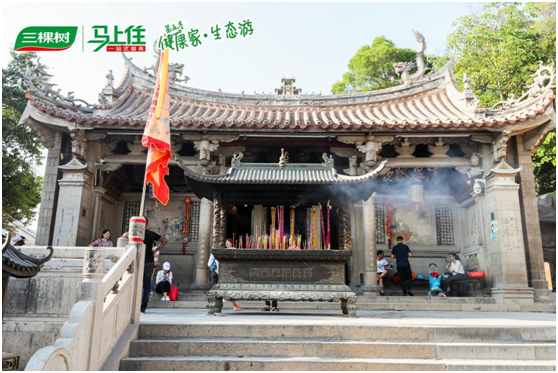 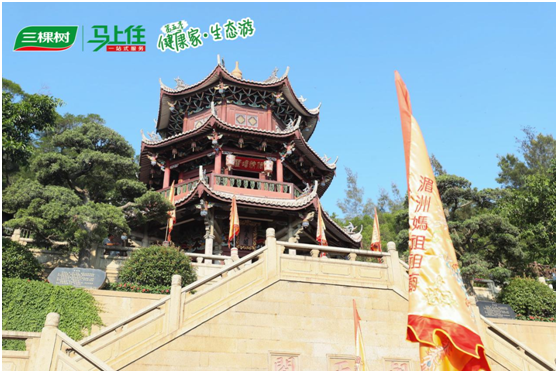 The Third Stop for Experience of Wuyi Mountain's Passion

The third stop of the trip was Wuyi Mountain, which is a double heritage of world culture and nature, famous not only for being a mountain site of Buddhism, Taoism and Confucianism, but also for its best protected and most abundant ecology in all of the areas of the same latitude of the earth which epitomizes harmonious coexistence between man and nature. 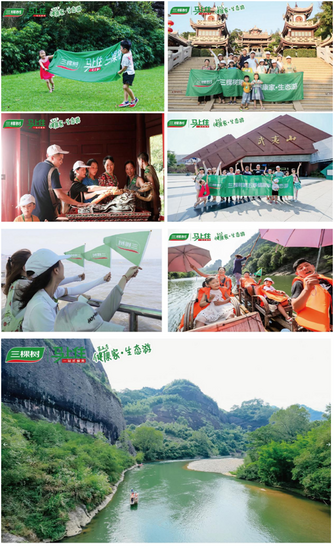 For hundreds of millions of years, nature's uncanny workmanship has given rise to the beautiful scenery of Wuyi Mountain for its steep peaks, beautiful waters, clear streams and red peaks. And all experienced the strange peaks and rocks on both sides of Jiuqu River, the surprise of the “Line of Sky”, and the steepness of Roaring Tiger Rock. After some rest, they tasted the good tea brewed by tea farmers in the mountains, when suddenly the tea was so fragrant. So laughter was echoing at the foot of Peak Yunv.

Creating a green brand, making healthy products, building a cultural enterprise and following a meaningful career: those are what 3TREES’s original aspirations and dreams are about. So while committed to making safe and healthy products for Chinese families, 3TREES has also been actively promoting a healthier lifestyle and advocating harmonious coexistence between man and nature.

Bearing such ideas in mind, 3TREES invites consumers, distributors and foreman to "eco-tours" each year, through which, it is hoped that, not only could consumers understand its products, but more importantly, people could have a deeper understanding of its cultural soil and natural environment. After the event, Mr Deng, who works at the airport, highly commended 3TREES’s corporate culture: "Its culture is really first-class, so I shall learn from you". And the person in charge of a decoration company who gave this tour opportunity to his employees said: "The employees responded very well when they came back, and I hope that I could participate when I have the time!"

To make homes healthier and the world more beautiful, 3TREES has been making efforts to enable its concept of "healthy, green and natural" to benefit the wider population, and to realize the corporate vision of "Supporting the earth and greening the world" step by step. Brave the wind and waves, and the future is promising!