On November 15, 2020, the 7th West Bund Art and Design Expo (“West Bund Expo”) drew to a successful conclusion. As the first international blockbuster art exhibition held as scheduled in …...

“Green the Gobi and Support the Earth”: 3TREES Holds Tour to Gobi for Nirvana 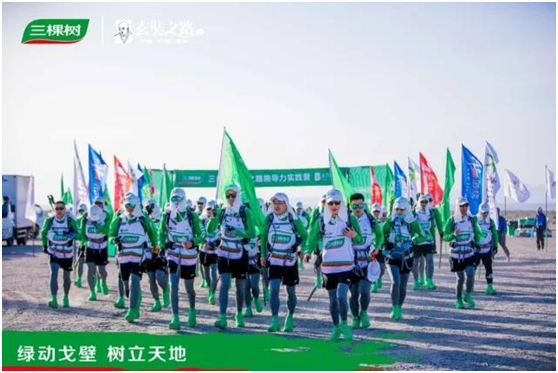 Hong Jie, Chairman of 3TREES, led 59 senior executives and partners to gather at the Dianjiangtai in Dunhuang, and jointly sounded the clarion call for 3TREES's Gobi trip on May 26, 2018, starting a journey of ideal, action, persistence and transcendence.

May 27, the first day of team competition day, witnessed sixty 3TREES warriors set off from Ashoka Temple in Guazhou, Gansu Province, and visualized what is meant by love, ideals and progress in the boundless sea of sand.

With yellow sand, dizzying sunshine, the connection between heaven and earth and a journey of 28km ahead, 3TREES members were appreciating the historical and cultural relics such as Ashoka Temple, Suoyang City, and Twin Tomb Side Towers, watching their dreams shine on the future, facing the scorching sun with their feet firm on the earth to fight ceaselessly. 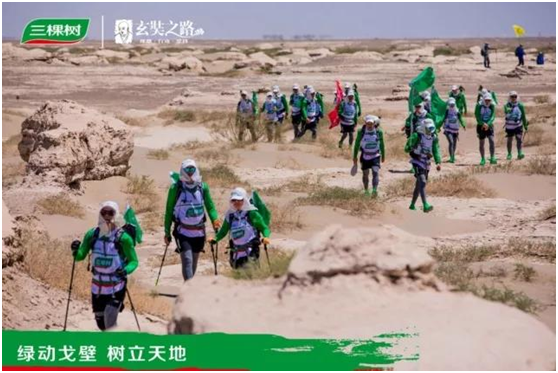 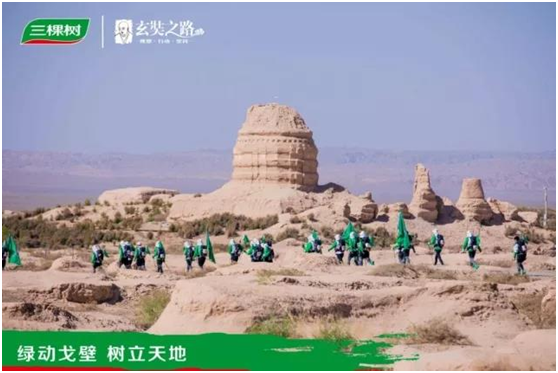 May 28 was the second day for team competition. After their curiosity subsided, their steps turned heavy, and the meaning behind the 31km trek was forgotten, and yet their steps forward were firm as before. The rule of competition that time when the sixth walker arrived at the camp was the final time left eight players from four groups behind, who persisted until the end agreeing that the distance between them should not exceed 20 meters so that no one would be left behind.

With blisters under their feet joined, swelling and pain felt in the joints, their strength reaching zero, they found the uncertainty and despair that they might not reach the camp filling their hearts ... Each step in the last six kilometers was a cause for suffering. Finally there was still the last 300 meters away from the camp when the first team members dragged their legs full of blisters and helped each other to line up at the end, ringing the drums to welcome the warriors who had been injured and walked for 11 hours! 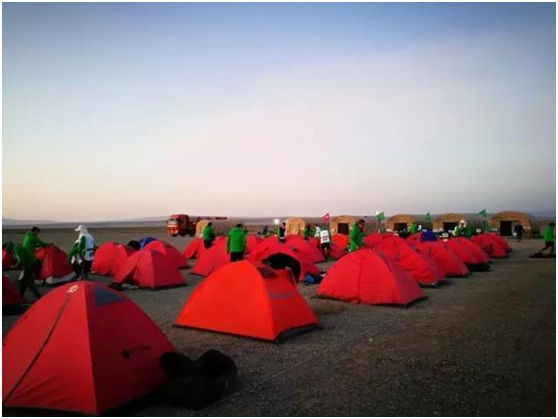 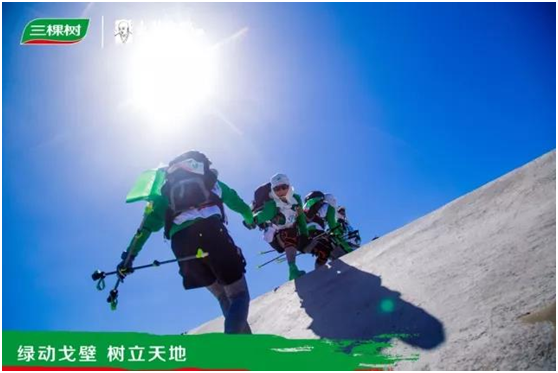 On the third day of the competition, May 29, which was called the "Despairing Day", 3TREES members walked along in the desert, gritting their teeth!

Walking alone one goes fast, and one travels far in a group, and we going through the vast Gobi together are all sisters and brothers! According to the statistics of the organizing committee, 3TREES outperformed 90% of the companies participating in the Gobi going event, with no one backing off in the whole process! Facing several kilometers of saline-alkali land covered with camel thorn (a thorny plant) and uneven ground, Hong Jie, Chairman of 3TREES, said with emotion that "we are the camel of the cause", greatness is grown out of ordeals, and by the joint effort of groups of people! 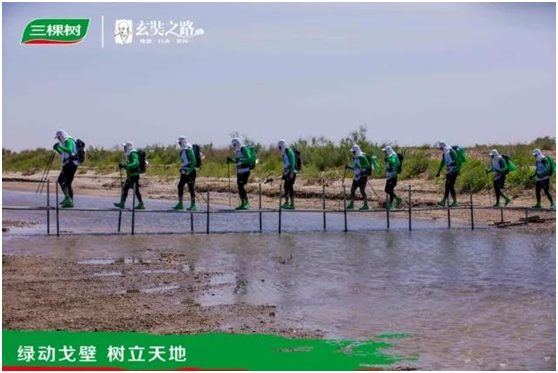 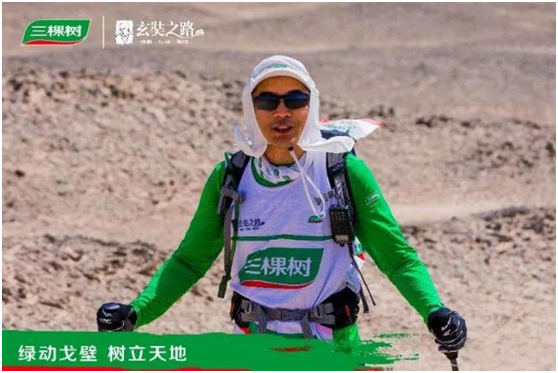 May 30 was the Day for Individual Competition, and as long as we didn't stop, the end point will surely come!

On the first day of the race, one of the members whose feet were blistered and whose toenails almost fell off gritted his teeth for 31km on the next day and 32km on the third. And by the fourth day, he felt that he could no longer go on, so in order not to affect the team and leave no regrets, he specially applied to the organizing committee to get up one hour earlier and start at 4: 30 in the morning! Flags flying, the brave shall win! 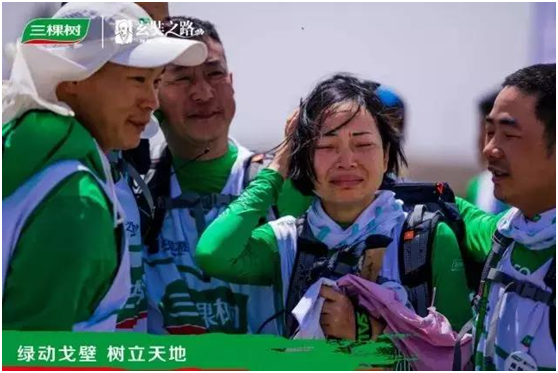 As one of the few chairmen who participated in the whole competition, Mr. Hong, together with the elite team, sprinted the 20 km individual challenge on the fourth day despite the pain left during the competition of the few days, and finally came back with good results as one of the top five. One of a winning heart wins the race! 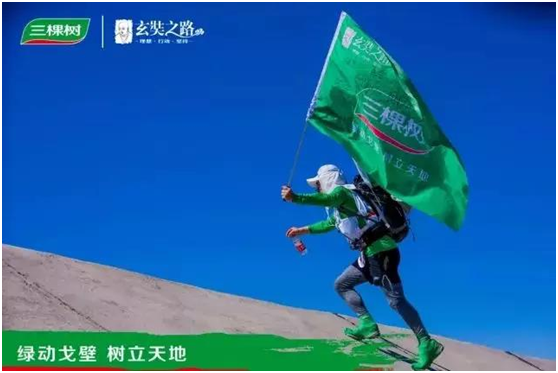 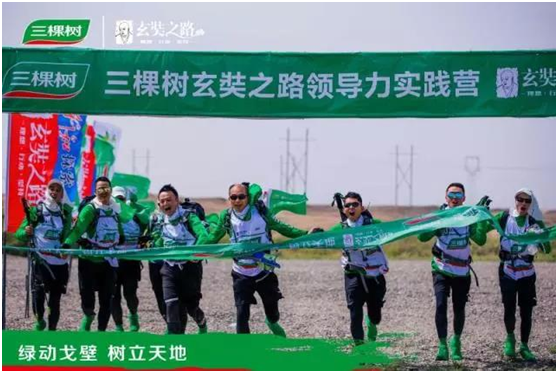 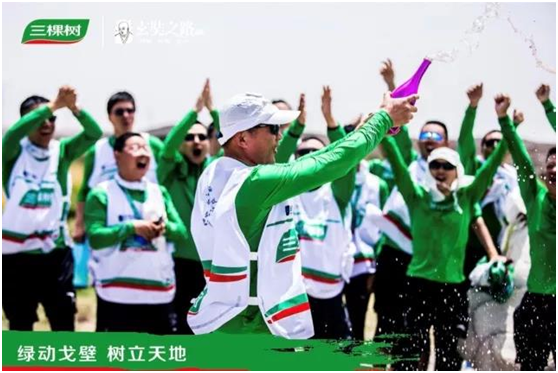 The 3TREES members took the sky as their quilt and the earth as their bed, sleeping out in the wind and rain.

The 3TREES members walked all the way, helped each other, were strong through their unity, and became all the stronger!

The 3TREES warriors, despite the hardships, crossed the Moheyanqi Gobi, and ended their journey on foot. They shall learn and take in the Hsuan Tsang spirit of "ideals, actions, persistence and transcendence", and carry through the corporate spirit of "having dreams and emotions, working hard, always striving for the first, respecting nature and caring for your compatriots, and being full of vigor and vitality", to make true the dream of RMB100 billion and great undertakings. 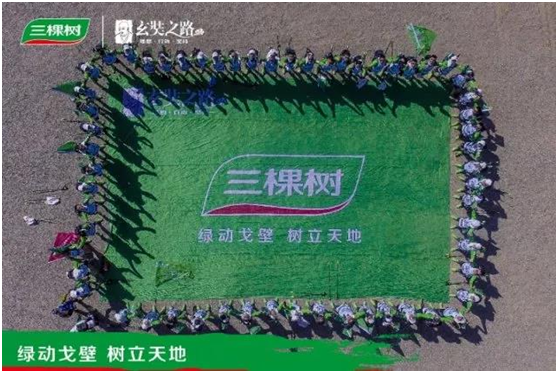